The project involved the remediation of a waste water treatment process containing a large covered anaerobic lagoon (CAL), an aerobic sequencing batch reactor (SBR) and a series of downstream open ponds.  The pond downstream of the SBR was heavily loaded with a thick hard grease cap. The CAL was believed to have a 1metre plus grease cap (GHD- Treatment plant design Engineers) and the SBR had developed a thick foam cap that had prevented aeration and mixing.

The load to the treatment plant was made up in two parts: -

Approximately two thirds of the flow was from a rendering plant adjacent to the Biodiesel plant and the balance from BPL. Each site was initially tested weekly by grab sampling. Both sites reported erratic results varying from 490,000mg/L COD to as low as 1,600mg/L. Auto sampling commenced during the commencement of the program to give more consistent results.

The CAL had been in use for over 2 years and had been generating methane (Volume not measured). It was assumed that it was working well in the breakdown of the COD and FOG. In December 2009 the quality of the effluent began to decrease, overloading the SBR with FOG. The average discharge from the CAL of the first quarter of 2010 was 28,300mg/L COD, 4000mg/L VFAs, 6,429mg/l TSS and 1278mg/L FOG. This overloading of the SBR caused the formation of dense foam on aeration and mixing. The foam would not breakdown, despite a variety of methods tried, and would overflow from the walls of the SBR. This foam formation prevented the use of the mixers and aerators, causing the tank to became anaerobic preventing any of the denitrification sequencing cycles which the vessel had been designed for. FOG in the discharge then flowed into the subsequent ponds building up to form a hard grease cap. The foam formed in the SBR had a unique texture similar to fine mica flakes that was very dense and stable. It also had little to no odour. Its identity or cause was not initially determined. The liquid in the SBR was highly odorous.

Due to the foaming issue the SBR became a large holding tank for the fat and because of the reduced mixing, the solids were settling on the bottom of the tank. The average discharge from the SBR for the first quarter of 2010 was 22,550mg/L COD and   5,992 mg/l TSS. This is a reduction of 20%in the COD and only 6.8% reduction in TSS. This was possibly in part due to the creation of the dense foam and settling of solids to the bottom of the SBR.

The Aims of the Program.

The aim for Environmental Biotech was to bioremediate with its GES bacteria cultures, both ponds with three main initial criteria:-
1. To reduce the FOG in the CAL discharge to less than 150mg/L.
2. To eliminate the stable fat foam in the SBR to allow the denitrification sequencing program to be reinstated.
3. To clean up the hard fat layer from the surfaces of the open ponds.

The CAL was initially slug dosed with 400 Litres of GES bacteria in addition to a constant metered dosing rate of 400 litres per fortnight with the inflow.

The SBR was initially dosed with 200 litres of GES bacteria in addition to a constant metered dosing rate of 400 litres of aerated bacteria per fortnight. 2 x 1000 litre UBC storage drums were fitted with 300 watt aquarium heaters to keep the bacteria at a temperature between 22-25 degrees C. Mixing and aeration of the SBR was provided on an "as much as possible" basis using the two 30K watt surface mounted aspiring aerators and two 11K watt submersible venture aerators. This  mixing was extremely limited due to rapid formation of foam which quickly covered the pontoons on which the mixing motors are mounted.

* = % drop compared to average results in the calendar year prior to commencement of GES trial.

The second pond has a large amount of fat volcanoes on the fat crust surface releasing gas from under the grease cap indicating significant biological activity occurring.

Large drops in all measured chemical parameters in the effluent from both the CAL and SBR. FOG from the CAL has dropped to below 150mg/l to achieve one of the initial primary goals. The thick mica like foam in the SBR has all been removed and replaced with coarse, large bubble soft foam that easily collapses on itself. The odour of the SBR is now earthy and inoffensive.

A second slug dose of  GES bacteria was added during this period as the solids in the bottom of the tank began to break up releasing fats that had been trapped with the sediments. This caused some very erratic behavior of the SBR as the anaerobic fat/solid material was suddenly liberated from the bottom of the SBR.   One weekend the mixing was accidentally turned off and on recommencing mixing a thick hard Styrofoam like foam formed that lasted for 2 days. This foam then broke down to leave the current coarse normal froth.

The 2nd pond was observed with the once hard grease cap breaking down and becoming quite soft. Open water gaps could be observed.

The 2nd pond is now completely clear of any floating fats. 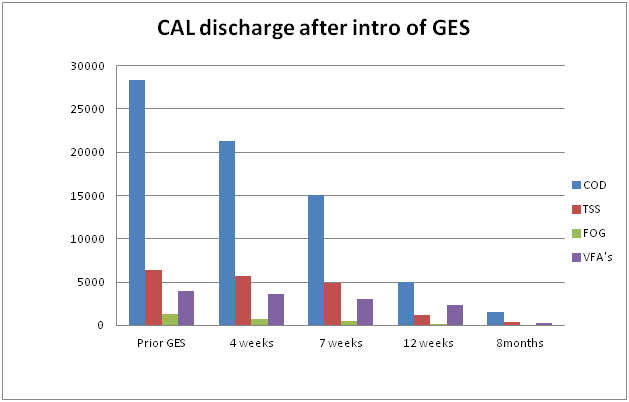 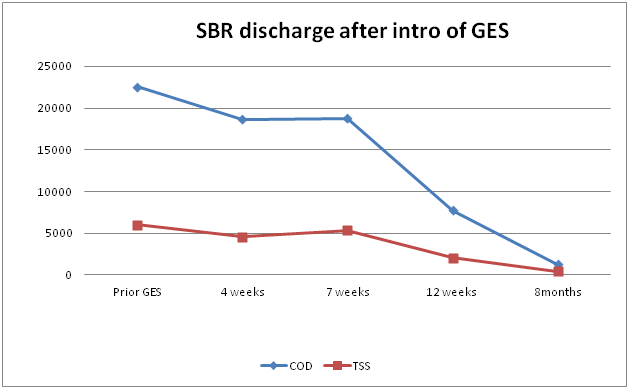 The introduction of the GES bacteria has been successful in the breakdown of the FOG/BOD/COD/TSS within the CAL to historically low values. This has reduced the load going to the SBR. Once the foam was remediated the SBR could be returned to its correct usage allowing for the batch sequencing for denitrification to occur.

The bacteria have also broken down the solids formation on the bottom of the SBR further reducing the FOG leaving the SBR.

The secondary pond has been cleaned up by bacterial activity and decreased load from the SBR.

All aims were achieved and well passed. The GES bacteria was progressively reduced and is now suspended. BPL has made efforts to ensure excessive FOG does not enter the CAL. 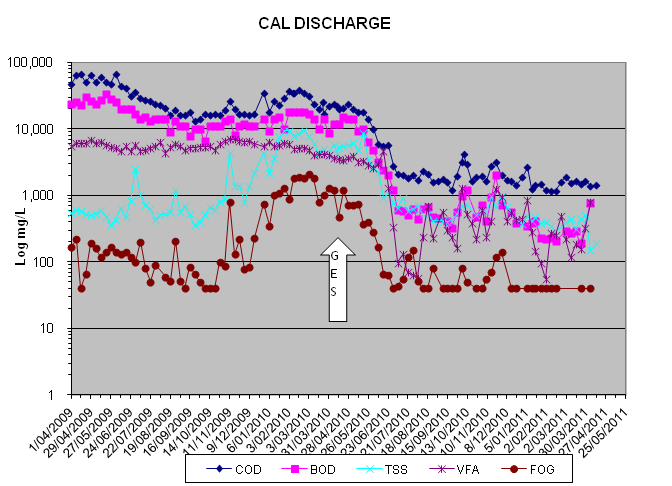 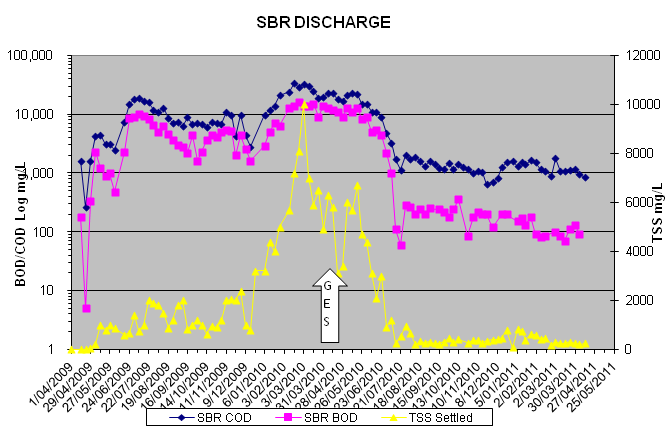